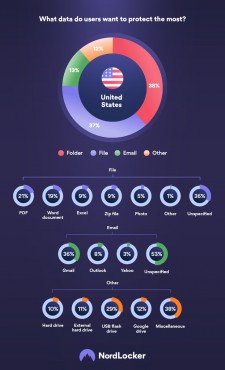 LONDON, September 21, 2020 (Newswire.com) - ​New research by the file encryption tool NordLocker reveals that PDF is the file type Americans want to keep away from prying eyes the most. In total, 21% of users who search Google for ways to protect their files want to know how to secure their PDF files.

Why are people so keen on hiding their files from others? Earlier this year, NordLocker found that more than half of Americans (52%) share their personal computers with other people, such as their children, parents, or spouses. “To keep their personal information private, users look for various protection methods,” says Oliver Noble, an encryption specialist at NordLocker. “News about various hacks has been making headlines every day. Users have become more concerned about their privacy and are thus trying to form new cybersecurity habits, like protection of important files.”

When analyzing the volumes of keywords related to ways to protect, secure, lock, encrypt, or hide something, NordLocker’s researchers found that email comes third on the most-searched list. Among various email providers, Gmail is the leading one (36%). The results aren’t surprising as email is the most common method of sharing files for 58% of Americans.

“Being aware of the risk of a cybercriminal accessing and compromising their email along with all of its attachments, including personal photos or documents, makes users look for security solutions,” explains Oliver Noble. “Since email is the most popular attack vector, the best way to make sure that only the intended receivers see the content of an email is to start using reliable encryption tools.”

There is another clear tendency NordLocker’s study has uncovered: the greatest part of American users (29%) searching for ways to secure their cloud storage and removable drives want to know how to secure their USB flash drives. According to the expert, those handy USB peripherals are critical in modern-day schooling and work, yet they can get easily lost or misplaced. “Even if you are not handling very sensitive information on your external storage drive, you wouldn’t want unauthorized people to access it.”

For those struggling with effective digital data protection, security experts advise to rely on file encryption tools. “These apps will not only make sure your data is safe on your computer or in the cloud but will also help you share it safely with other people,” explains Oliver Noble from NordLocker.

NordLocker is a tool that secures files stored on a computer or in the cloud with end-to-end encryption. It was created by the cybersecurity experts behind NordVPN – one of the most advanced VPN service providers in the world.

More findings can be found here.

cybersecurity, file encryption, how to encrypt files, how to hack